Rolls Royce is a major manufacturer of aero engines for the large commercial aircraft, regional jet and business aviation markets. With 35 types of aircraft powered by Rolls Royce and 13,000 engines in service around the world, they are the pioneers of civil aerospace. 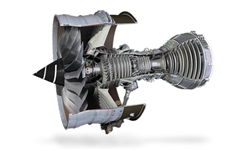 Rolls Royce experienced problems at their Derby facility with the heater used on the Trent XWB-97k engine variant, which is fitted on the Airbus A350-1000 aircraft. Rolls Royce are the exclusive provider of this engine. Due to a slight change from the original baseline Trent XWB-84k engine, the interference fit is much harder to achieve on this variant.

Their previous silicone heater from another manufacturer was unable to consistently reach the uniform temperature required to allow interference fit of certain components. The heaters are used to raise the temperature of the components to the point they expand, to achieve interference fit - a form of fastening between two tight fitting mating parts, that produces a joint which is held together by friction. In this instance the component in question is the ‘combustion chamber’ where fuel is mixed with air to combust in order to produce thrust for the engine.

Darren Potter, SMT Manager at Rolls Royce , says “The combustion chamber is a cylindrical case roughly 1m x 1m in size so acts as a large heatsink absorbing significant amounts of heat until the internal diameter starts to expand. Hence the original silicone heater was woefully inadequate due to its inability to reach a consistently uniform temperature leading to us to place the component in an industrial oven with all the associated health and safety issues!”

Solution – Where Heatrod came in

Rolls Royce approached a number of suppliers with the aim of obtaining a bespoke new heater to ensure the process was achieved, enhancing the existing, but with much better heating capabilities.

Says Darren, “the solution from Heatrod Industrial presented a number of benefits in terms of higher heat, more robust element, proven technology and scope to use on other applications. We performed a number of trials on a dummy combustor chamber to test the technology, in addition to altering the temperature rating to the point we launched validation on a production component. It was obvious from the start that the only limitation was really how much heat we were prepared to allow into the component as the heater itself has plenty of capacity.”

Illustration showing the heater (green) inside the combustion chamber on the profile with the interference fit. 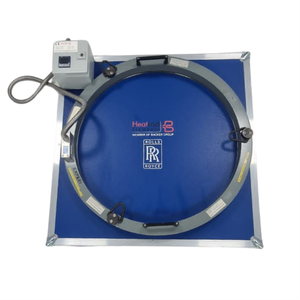 The new COCC Unit Heater (RRT 104347/HRK0001) has now been fully validated by Rolls Royce and is mandated in their engine manual for this operation. In due course the heater will be used by their MRO (Maintenance, Review, Overhaul) network, this is currently underway, quotations have been provided and will be ordered imminently.